Governor Greg Abbott recently released a “Report to the People of Texas” and there is good news.

And the hits keep coming. We led the nation job growth in February of this year, adding 40,500 jobs, continuing a 20-month growth streak, according to the Texas Workforce Commission. New York and Florida were a distant 2nd and 3rd.

Further, driven by a recovery in the energy sector, the Federal Reserve Bank of Dallas projected a statewide job growth rate of 3.4 percent for the year, up from 2.1 percent last year. 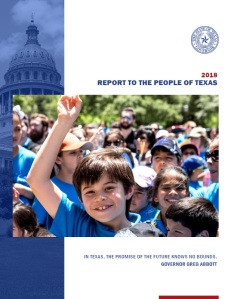 Gov. Greg Abbott recently released a “Report to the People of Texas.”

We are the top exporting state by far – our exports of $264 BILLION last year surpassed runner-up California by more than 50%!

Think about this.. The Texas economy is now the 10th largest in the world and we’ve had 92 consecutive months  — 7 ½ years — of job growth.

So how do we keep the train on track?

The Texas 2050 Coalition of major business, economic development groups and Chambers of Commerce has been working closely with state leaders like the Select Committee on Economic Competitiveness to keep our eye on the long-term.

The Committee released their report recently and had a primary theme: with global economic leadership at stake, education and workforce development are more critical than ever.  We must stress innovation in education for our Texas students, across multiple disciplines.

Other topics covered in the report that deserve emphasis include supporting our small businesses and entrepreneurs, “smart cities,” and incentives to compete.

We must stress innovation in education for our Texas students, across multiple disciplines.

Since we were also # 1 in population growth in 2017, we’ll need more infrastructure like roads but also broadband technology.  Any action by Congress for public-private partnerships to accelerate infrastructure development will likely require corresponding action by the Texas Legislature in 2019.

Austin, Dallas and other cities STILL anxiously await the decision by Amazon on HQ2.

Finally, Austin, Dallas and other cities STILL anxiously await the decision by Amazon on HQ2 – their second North American headquarters. While odds makers initially had Austin and Dallas in the top 5, Texas’ job just got tougher.  Get this.. the state of Maryland has offered Amazon 6.5BILLION in tax incentives and $2BILLION for transit improvements.  That may be hard to beat.

For more on the Committee’s findings or other policy matters find me online at Quorum Public Affairs; cc@quorumpublicaffairs.com; or 512-762-7366.